BEE VENOM IS A POWERFUL ANTIVIRAL 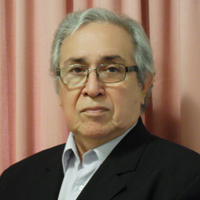 (Córdoba, November 12, 2020) Bee venom is a complex mixture of proteins, polypeptides, low molecular weight components and aromatic and aliphatic constituents in different proportions, says Néstor Urtubey (photo) at the beginning of his article "Antiviral Action of Bee Venom and Apitoxin for Medical Use" published in Espacio Apícola magazine #129 last August.
Phospholipase A2, which constitutes between 10 to 12% of the dry bee venom weight, is an enzyme that acts on the lipid bilayer of viruses, inactivating them. Its activity is increased when it acts synergistically with Melittin, a polypeptide with hemolytic action that constitutes between 40 to 50% of the dry bee venom weight. This acts directly on the membranes, deregulates them, breaks them, opening the way for an increased activity of Phospholipase A2. Different researchers around the world has verified this effect in viruses such as influenza H1N1, acquired immunodeficiency HIV, herpes zoster, stomatitis VSV, respiratory RSV, herpes simplex HSV and others.
The honeybee (Apis mellifera) is well known for its production of honey from the nectar of flowers, for its collection of pollen, which it amalgamates into small and colorful pellets of a couple millimeters of diameter, or the propolis that is collected by bees to sanitize their habitat. Finally, as a result of their glandular activity the bees excrete the wax, royal jelly and poison which bees inoculate their victims when they must defend their nest.
This venom has been used since immemorial time, with direct bee stings, to treat collagen diseases such as arthritis, polyarthritis, psoriasis, lupus, among others. From a long time to now, electronic devices are used as "traps" to extract the bee venom without killing the individuals. Professor Néstor Urtubey developed a method, more than thirty years ago, to purify and dilute this venom, which is packaged in injectable ampoules with standardized dosages and according to the different medical treatments. He is a professor in Natural Sciences, scientific advisor of Ramis Pharmacy, in Tucumán, Argentina and a member of the expert committee of the International Federation of Apitherapy (FIA) based in Romania. This year he published his book "From bee venom to Apitoxin for medical use".