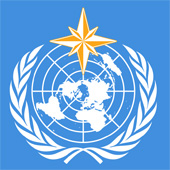 (World Meteorological Organization WMO, Geneve, October 29th. 2020) La Niña has developed and is expected to last into next year, affecting temperatures, precipitation and storm patterns in many parts of the world, according to the WMO.
This year's La Niña is expected to be moderate to strong. The last time there was a strong event was in 2010-2011, followed by a moderate event in 2011-2012.
La Niña refers to the large-scale cooling of the ocean surface temperatures in the central and eastern equatorial Pacific Ocean, coupled with changes in the tropical atmospheric circulation, namely winds, pressure and rainfall. 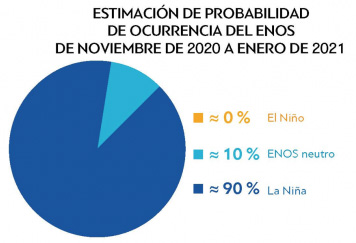 WMO's new ENSO Update states there is a high likelihood (90%) of tropical Pacific sea surface temperatures remaining at La Niña levels through the end of 2020, and maybe through the first quarter of 2021 (55%). This follows more than a year of neutral ENSO conditions (i.e., neither El Niño nor La Niña).
It is important to note that El Niño and La Niña are not the only factors that drive global and regional climate patterns.
In addition to El Niño and La Niña, the Global Seasonal Climate Update GSCU incorporates influences of other climate drivers, such as the North Atlantic Oscillation, the Indian Ocean Dipole, to assess their likely effects on regional surface temperature and precipitation patterns.

North America, Central America and the Caribbean impact
In North America, La Niña typically brings above-average along the northern tier of the continent along with below-average precipitation and across the South. The latest forecast model results are consistent with this historical impact analysis.
In the Caribbean, La Niña events can contribute to an increase in intensity of the hurricane season. The 2020 season has been one of the most active on record so far.