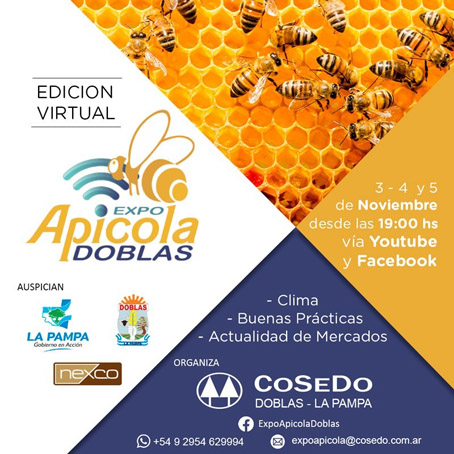 (Espacio Apícola, Córdoba, Argentina, October 20th. 2020) Beekeeping Cooperative of Doblas, La Pampa province in Argentina, has announced its first api-virtual-expo edition to be broadcast on YouTube and Facebook.
On November 3, 4 and 5, starting at 7:00 p.m. we will have the opportunity to listen to Leonardo de Benedictis, climatologist at Canal Rural, making his projection; then on Nov. 4th, Norberto García, president of the beekeeping economy commission of Apimondia, will speak about the honey market; and, finally, on Nov. 5th, Graciela Rodríguez (from INTA Hilario Ascasubi) and Joaquín Moja (CONICET grant holder) will speak about Good Practices, emphasizing on nutrition management of beehives.
The activity is sponsored by the Government of La Pampa, Doblas city and NEXCO company, in an effort to keep Doblas' presence alive in the national beekeeping scene.
The beekeeping season in the region improved its expectations from yesterday's rains. There are few beekeepers who moved their beehives to the Río Negro Valley this year, many of them moved to the native forest within La Pampa province. According to Viviana Bravo, from COSEDO, there are a lot of honey in warehouses, in the cooperative's ones there would be about 200 drums waiting for an opportunity; beekeepers sell drum by drum not only expecting a better price, but also because there are not business opportunities due to restrictions imposed because COVID-19.
The cooperative, which once became an important exporter, currently markets the honey through the Henderson Cooperative or ACA, directly. The price of honey in the area would be $ 185 plus VAT to producers (Argentine pesos about U$S 2,40 per kg).
Storms developed throughout the Pampa Humeda and in the central area of the country between yesterday and today significantly improve the situation of the meadows for honey production. The general situation and health of the hives was very good as always when there is drought at the end of winter. The rains have already reached great areas of Buenos Aires, Santa Fe, Córdoba and Santiago del Estero provincies.